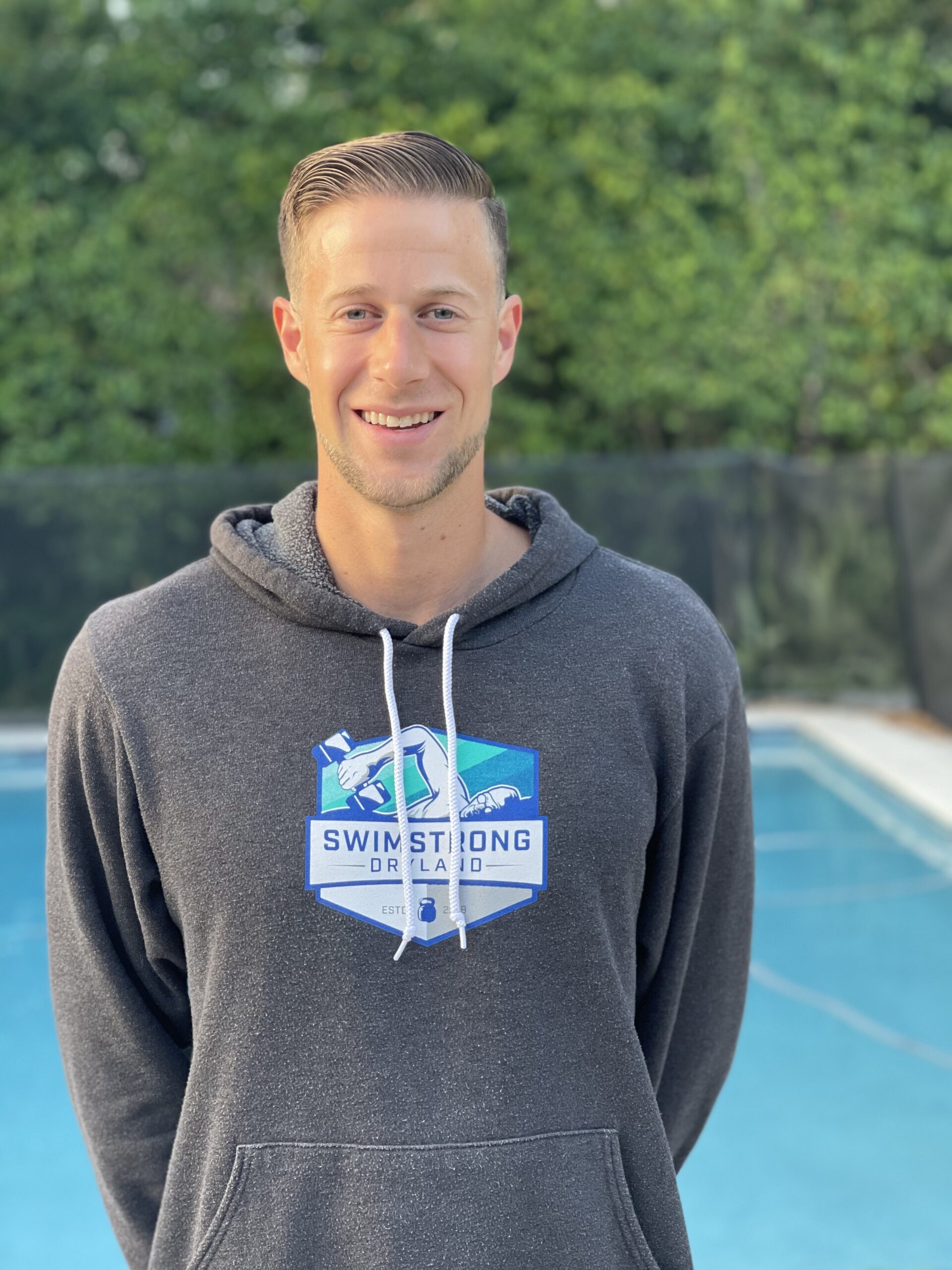 Eric has developed a system over the last 10 years that has created some of the top swim athletes in the country. He has been in the fitness industry for 14 years, and his professional journey in fitness started in college where he majored in Exercise Science at Purdue University. Upon graduation, he worked as the head strength and conditioning coach of a club swim team near St. Louis. After spending three years on the pool deck as the dryland coach, he continued to work with high school swim athletes, while at the same time taking on new experiences that ranged from being the personal training manager in a multi-billion dollar fitness company, to working as the general manager and lead coach of a boutique group training gym. Through all of these experiences, his passion for working with and impacting competitive swimmers became more and more obvious to him. After three more years rounding out his knowledge of biomechanics and swim-specific performance training, he knew it was time to follow his heart and start focusing solely on dryland training. He felt the need for professionally designed swim-specific dryland training in the club swimming world, and wanted to create something that no other program could rival.

This is his passion and expertise, and with the sole focus being on SwimStrong Dryland, he continues to fine tune his skills and hunger to deliver the best world-class dryland program on the market. His 10 years of swim-specific experience uniquely positions him to help athletes reach goals they once thought impossible. Each dream achieved has made him dream bigger, reach higher, and desire to perfect his craft for the sake of the athletes and their families. He believes that dryland training should focus on more than just the body to get consistent results—the mind and heart must be strengthened as well. Inspiring young athletes to be not only phenomenal in the water, but phenomenal in their homes, schools, and communities is his passion. He wants to see the next generation positively impact the world and redefine the word “impossible”. 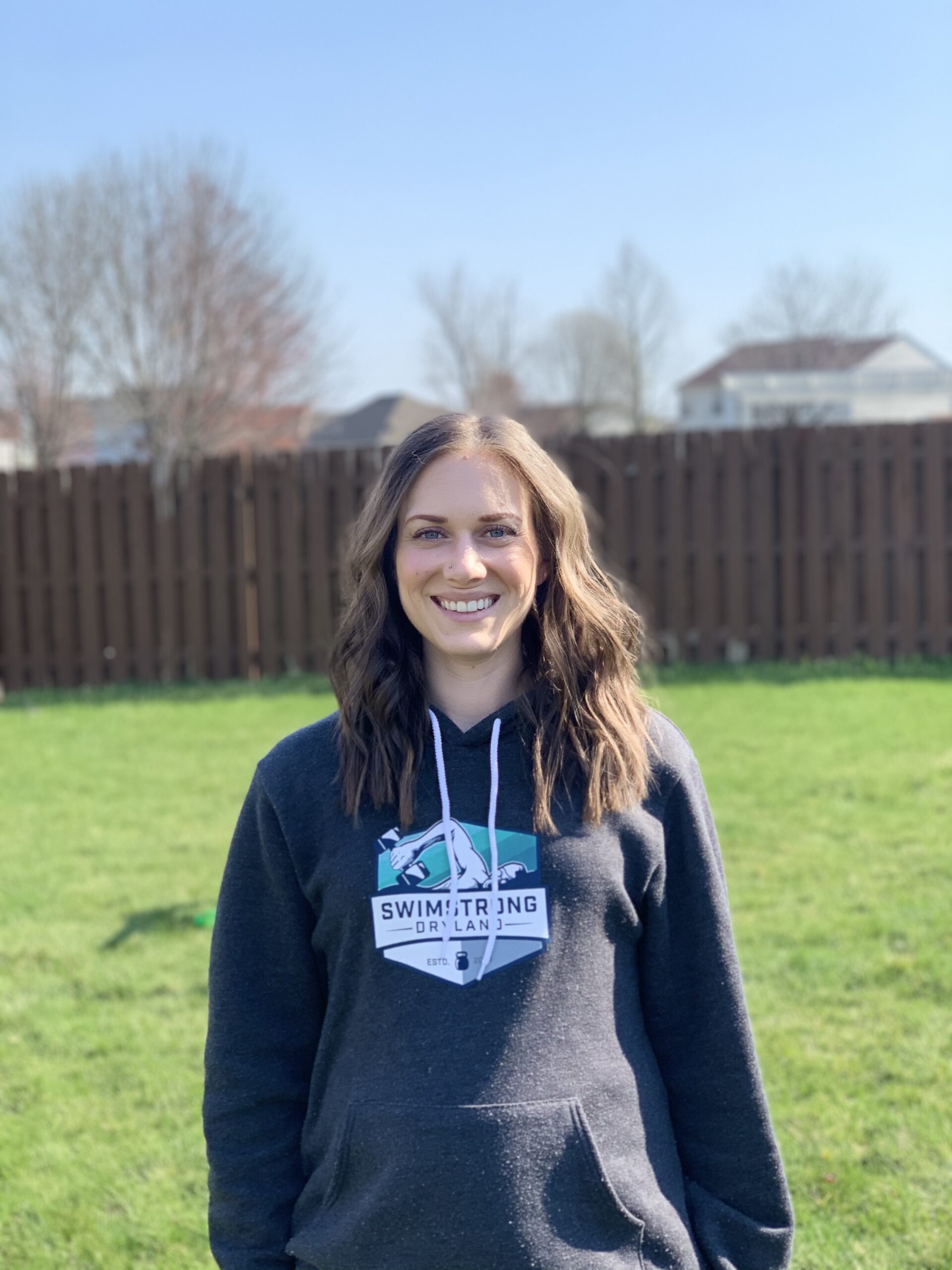 Brittany is certified as a Sports Nutrition Specialist through the National Academy of Sport Medicine, a Certified Exercise Nutrition Coach through Precision Nutrition, and a Youth Nutrition Specialist through the International Youth Conditioning Association. She strives to bring the most up-to-date, science-supported, and relevant nutrition education to all SwimStrong Dryland athletes, coaches, and parents via outstanding content, virtual webinars/seminars, and personal support. She also coaches a select few athletes in a small group setting.

Brittany has spent years creating nutrition education that will change the way swim athletes perform. Brittany was a competitive athlete herself from ages 5 to 18. In college, she began to realize she had been missing a key component of athletic performance her whole life – nutrition. She started making changes on her own and wanted to know everything she could about the field in order to help young athletes avoid the pitfalls she fell into.

Brittany is confident that nutrient-dense foods are crucial for peak athletic performance and that every swimmer has the ability to unlock hidden potential through proper fueling. She has experienced first-hand how a healthy relationship with food is a key starting point. She believes that habits hold great power, and that it is never too late to start implementing great habits that stick. These great habits will have a huge return on investment for the competitive swimmer’s performance, health, and well-being. She couldn’t be more excited to help meet the nutrition needs of the SwimStrong Dryland athletes!

Brittany lives on the Northside of Indianapolis with her husband, son, and daughter. In addition to health and wellness, she enjoys bargain hunting, DIY projects, and spending time with close friends and family. 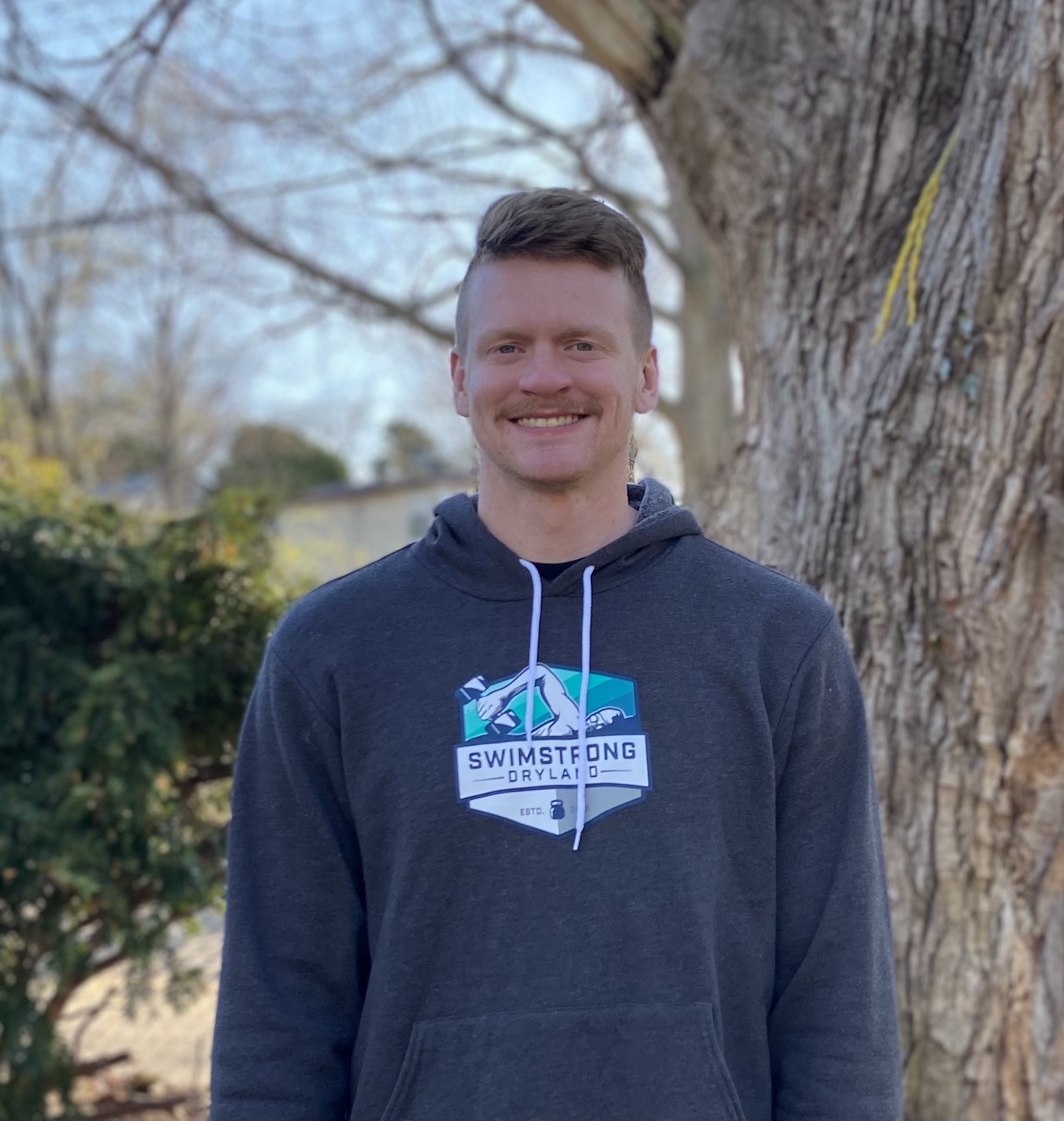 Bryan’s experience working with high school and collegiate swimmers is unparalleled, and he uses his wealth of knowledge and experience to continually transform SwimStrong Dryland into the premier swim-specific dryland program in the country. Bryan has been involved with the sport of swimming either as an athlete or a coach since he was 12 years old. He was a member of the club swim team in the St. Louis area where Eric Hudson began his swim-specific dryland coaching career. Bryan graduated high school in 2014 and earned a scholarship to swim at Eastern Illinois University, where he graduated from in 2018. Graduating with a Bachelor’s degree in Exercise Science, Bryan began his strength coaching career with internships at Southern Illinois University Edwardsville, University of Illinois, and DePaul University.

After graduating from Eastern Illinois, Bryan went on to earn his Master’s degree at the University of Louisville, where he graduated in 2020. While attending Louisville, Bryan interned with their Sports Performance Department, where he worked as a strength coach with the Louisville Swim Team for two years. He had the privilege of working with multiple Olympic athletes while at Louisville. He then went on to become the strength coach for the swim team at Lindenwood University in the St. Louis Area. In his two years with Lindenwood, he coached numerous Division 2 NCAA All-Americans, including an NCAA Champion, and he helped lead the women’s team to a conference title. With all his hands-on experience, Bryan was able to combine his knowledge as a former swimmer with the scientific training principles that are required to make swimmers faster in the water and more resilient to injury. Bryan now works full time with SwimStrong Dryland, making it his sole focus and passion to deliver the best possible dryland programming for our swim athletes. Bryan believes that we should never stop learning and researching so that we can always be growing and improving. He also believes dryland training should challenge athletes to develop both physically and mentally so they can be the best swimmer and person possible.

Bryan lives in Oregon with his wife Renae. In addition to SwimStrong Dryland, he loves spending time with his wife, their dogs (Duncan, Echo, and Atlas) and their cat (Moo). He also enjoys working out and the great outdoors. 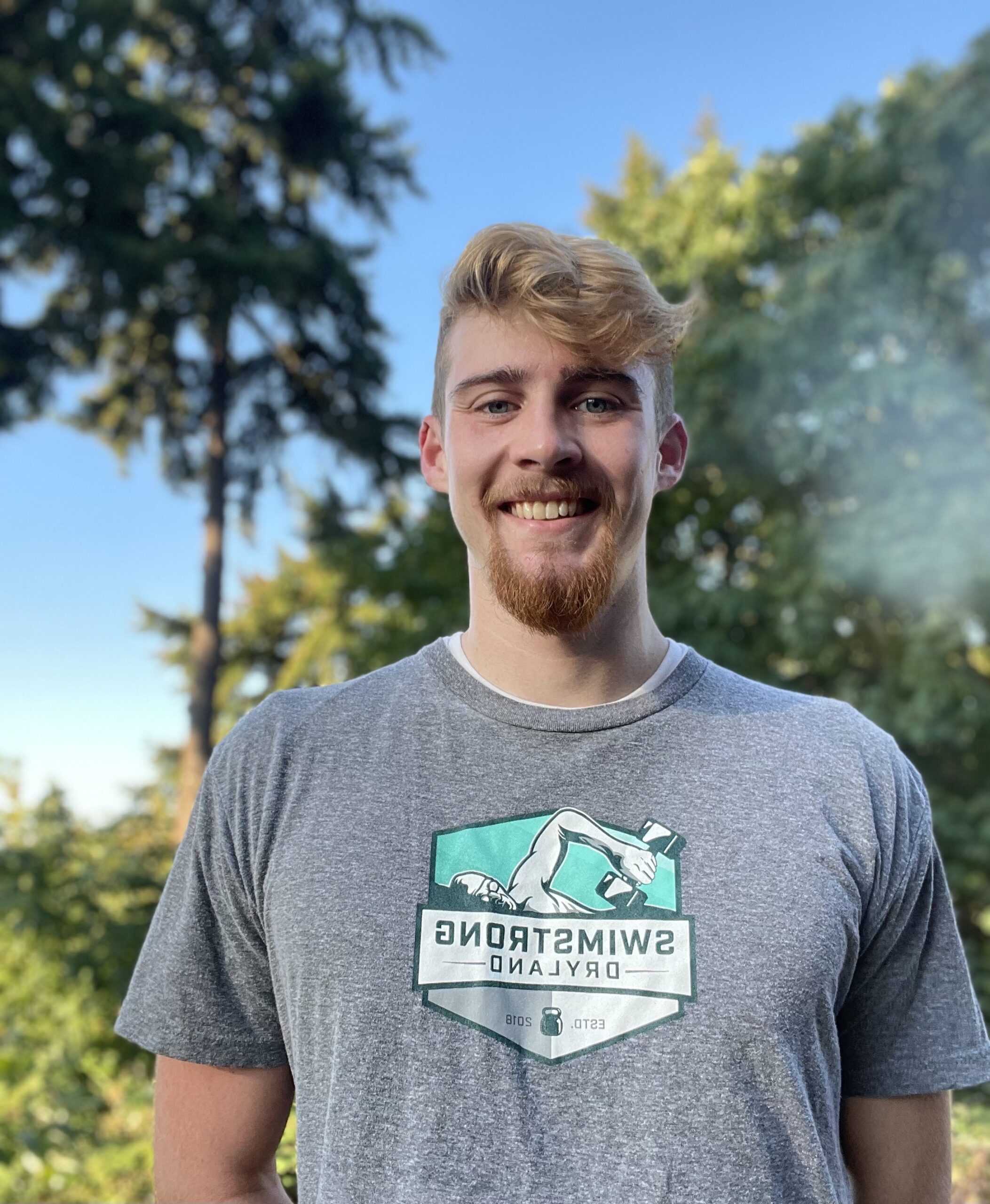 Constantly involved with sports growing up, Sean developed a love for competition at a young age. It was not until high school, however, that Sean started to focus his competitive nature solely on swimming. As freshman, Sean had only tasted decent success in the sport of swimming, progressing at an average rate. Soon after teaming up with Eric Hudson, however, Sean began to see exponential improvement in the pool. These improvements were not only the result of a workout routine change, but also a mindset change that they had instilled. Sean’s mantra soon became “if you want something as bad as you want to breathe, you will be successful”. By the end of his high school career, Sean was an Olympic Trials Qualifier, YMCA National Champion, multiple time National Runner-Up, and a Virginia Tech Swimming and Diving commit. Sean went on to train with some of the fastest swimmers and brightest coaches in the world of swimming at VT, competing at meets like the NCAA Championship, ACC Championship, US Open, and US Nationals during his 4 year swimming career in Blacksburg, VA. During his time at Virginia Tech, Sean obtained a BS in Mining Engineering, with a minor in Environmental Engineering.

Through his 16-year swim career, Sean realized, though, that the sport of swimming is much larger than how fast you can move up and down a pool. Swimming taught him lessons of true hard work, self-determination, cooperation, respect, and leadership on a daily basis. Those are the most valuable achievements that he has taken away from the sport of swimming. Records can be broken, medals can be lost, but the virtues and leadership skills gained from swimming will last a lifetime. Sean was able to find these values in the leadership roles he held, as well as the many leaders that guided him during his career. It is one of his dreams to help the next generation of swimmers find the lifelong lessons that lie in the world of swimming by inspiring them to be the best leaders they can be, both in and out of the pool. He now works full time with SwimStrong Dryland to fulfill that dream, and hopes to inspire our swim athletes on a daily basis while making a positive lifelong impact.

Sean lives in Phoenix, and in addition to SwimStrong Dryland, he enjoys spending time outside, hiking, open water swimming, working out, as well as playing Xbox and his guitar in any free time he has. 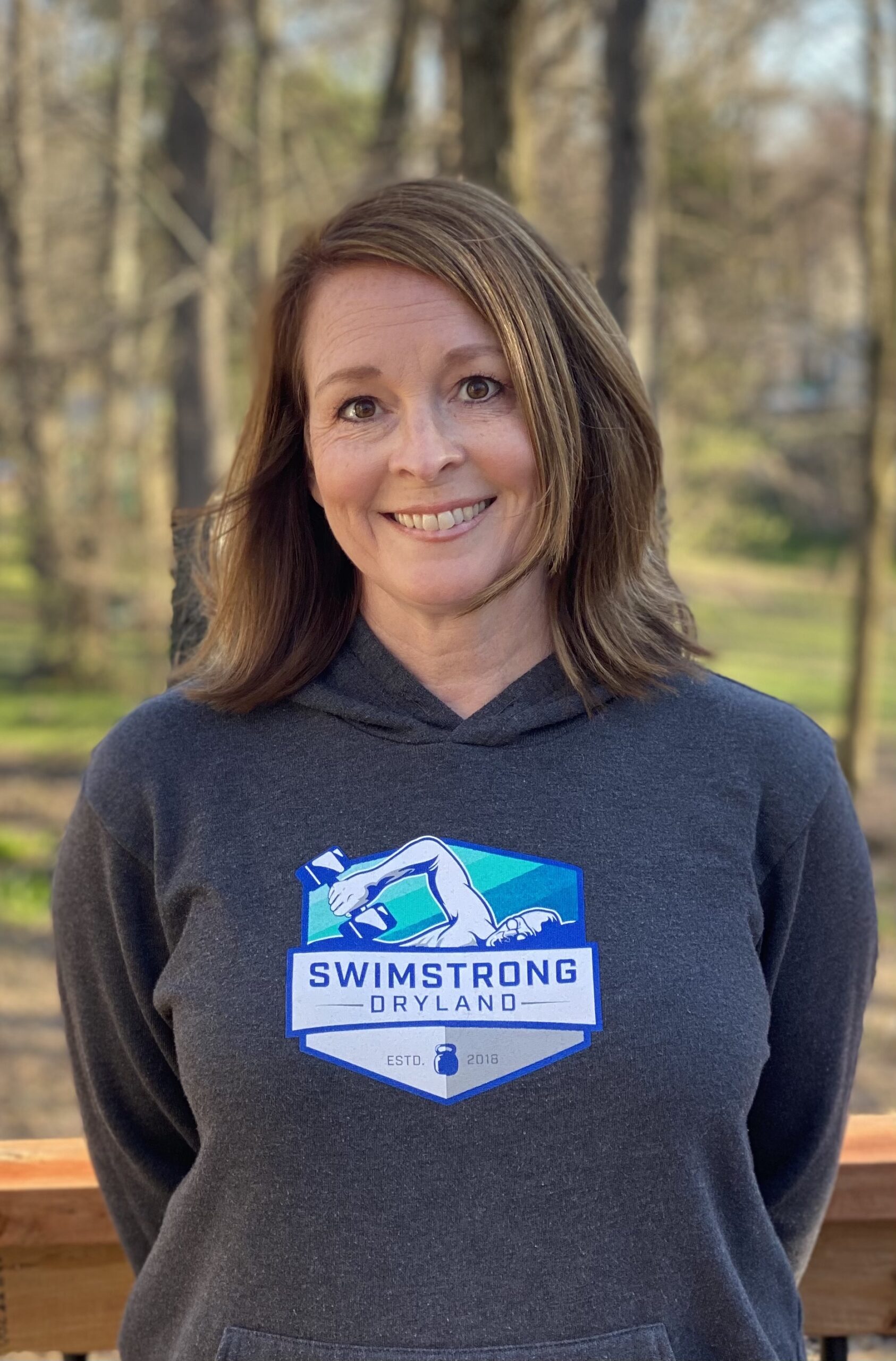 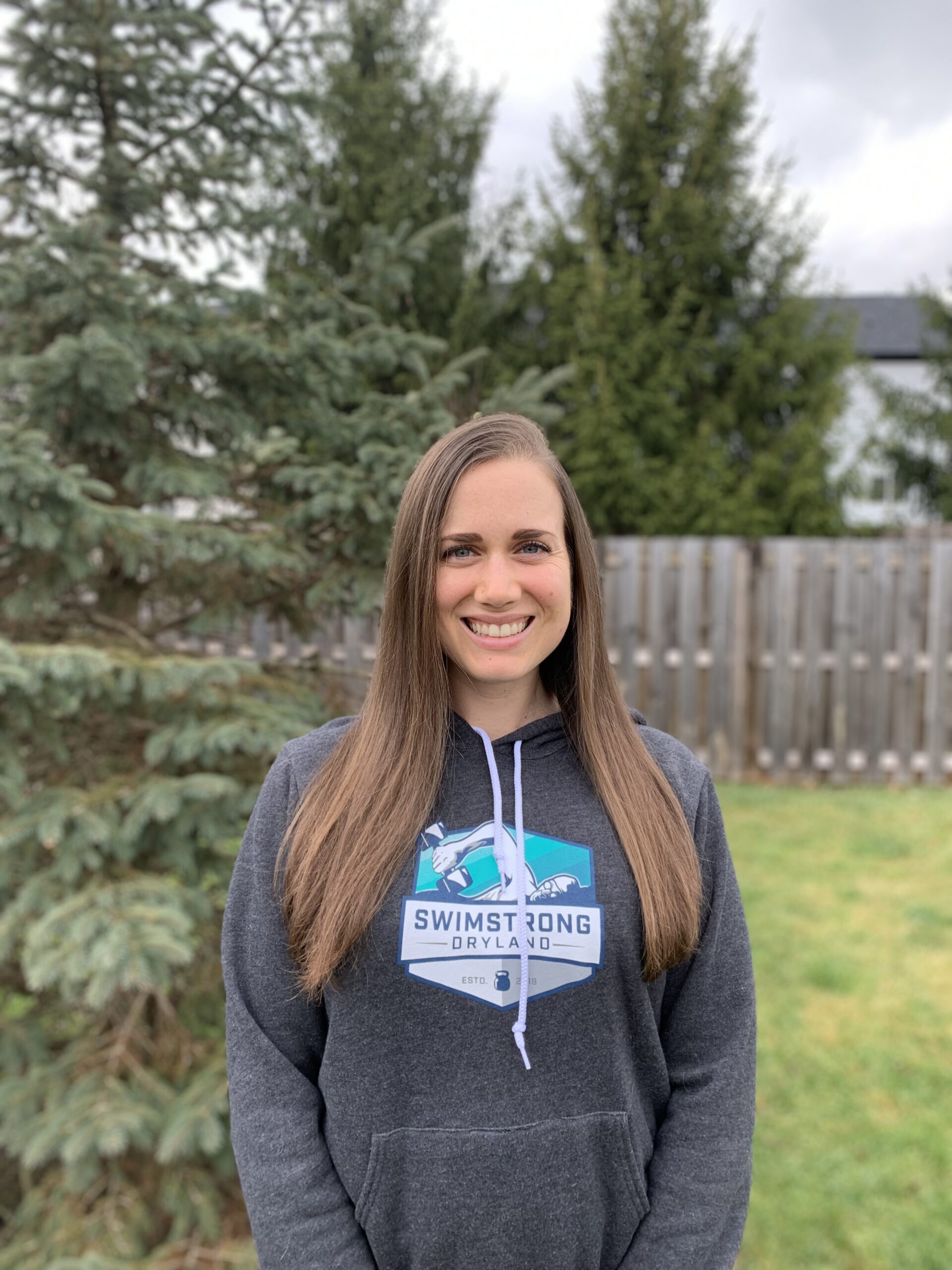 Christine graduated from Purdue University in 2014 and has over 7 years of business and administrative experience. She was a competitive athlete from childhood through high school and has a love of all sports. She has a passion for fitness and personal well-being, and enjoys learning about new ways to improve physically and mentally. Christine’s high character and care for people led her to want to make an impact with SwimStrong Dryland. She is continually creating new systems and procedures to make the delivery of the SwimStrong Dryland Program extremely efficient and practical.

As the Executive Assistant for SwimStrong Dryland, Christine works closely with team coaches, helps plan and execute major events, and handles a large number of administrative tasks in order to free up the rest of the team to focus on each of their specialities. This allows the SwimStrong Dryland Program to continually grow, evolve and thrive in powerful ways that positively impact every team and athlete we work with.

Christine lives Northwest of Indianapolis with her husband (Bryan), son (Brooks) and golden retriever (Jeter). In addition to SwimStrong Dryland, she enjoys cooking, visiting new places and hiking with her family.